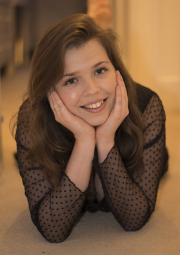 Felicity has been singing since the age of two and started lessons at the age of seven at the Hindhead Music Centre. Whilst there, she was introduced to Tenor David Bartleet, who instilled her passion and talent for Classical singing and later for Operatic singing. Under David’s tuition she had master classes with Audrey Hyland and Anne Williams-King, a Welsh Soprano, both of whom recognised her potential and heavily encouraged her to take her studies further.

Felicity won scholarships to her senior school and sixth form and during this time she gained a place at Junior Trinity Laban Conservatoire of Music and Dance, where she developed her vocal technique under the skillfull guidance of Sarah Vivien. Sarah started her journey into becoming a Bel-Canto Soprano. She was a member of the Four Part Choir and the elite group ‘Vocal Consort’ under Mark Griffiths. She won an opportunity to perform a concerto with the Junior Trinity Symphony Orchestra and performed Strauss ‘Morgen’ at Black Heath Halls, London. She was also chosen to be the soloist for the premiere of a collaborative piece with Laban Dance School called 'Anniversary for the Festival of Britain'.

Directly following A-Levels Felicity gained a place at the Royal Northern College of Music to study under Mary Plazas as a Bel-Canto Soprano. During her first year of study she took part in the Elsie Thurston competition held at RNCM, and received some promising comments from the panel and gained one of the top marks for her end of year recital. She also attended master classes taken by Lynne Dawson, Louise Winters, Sir Willard White and Dame Felicity Lott, Emma Kirkby and Sir Thomas Allen. During her second year of study she was part of a full scale production of ‘Paradise Moscow’ by Shostakovich and was a member of the chorus in an Opera Gala held at RNCM featuring the Mezzo Soprano Louise Winters and Soprano Linda Richardson.

In her third year of study performances included two chamber operas ‘Orfeo ed Euridice' and ‘The Drunkard’ by Gluck directed by Stephan Janski and Roger Hamilton together with the role of Fiordilligi from Mozart’s ‘Cosi Fan Tutte’ as part of the RNCM Opera Excerpts. She gained a top first and individual recognition of her outstanding performance.

During her 4th year opera scene, she was the lead female role in the Operetta ‘La Vie Parisienne’ by Offenbach. She was also selected to have a private coaching session with Sir John Tomlinson, James Gilchrist and Caroline Dowdle.

Felicity won a place with the Dulwich Opera Company in March 2016 to perform the role of Barbarina in their Charity concert performance at Kings College Hospital.

Felicity's graduated with Hons from Royal Northern College of Music in December 2015.

Felicity has been selected as a recording artist for Regent Street Artists, London.

Felicity's Original Single 'Meant To Be' is out now! Available to purchase on itunes/Amazon etc. and to stream on Spotify and other known music media sites!

Felicity has recently been seletced as a member of The North Wales Opera Studio founded and run by international Soprano Anne Williams-King and International Tenor David Bartleet, with whom Felicity is going to have vocal tution with.